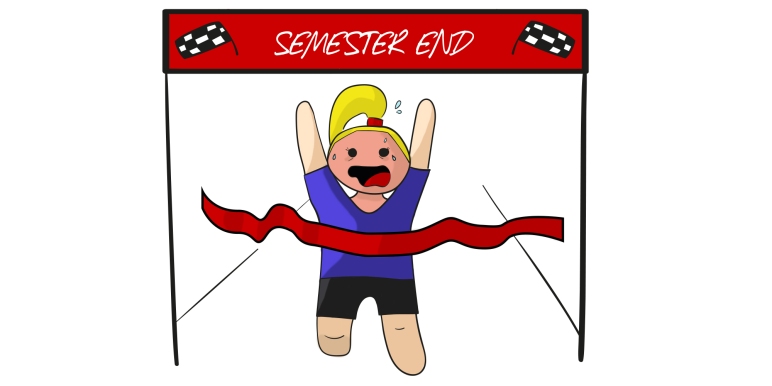 3rd semester has started. I survived the second semester but here is the very big question: Did I reach the goals I set for it?
Well, kind of 😃
The first goal was to be more organized and take notes of my thought process: check. Did that.
Second goal was – and I am going to quote myself here – “to put more thought and basically everything I have into all my projects, whatever it takes“:
Well, I did with some projects. Like the Micro-Comic, I put so much time in it and I am quite happy with how it turned out! I think I can show you a tiny snippet of it:

But I think, that was the one I put the most effort in, except for our project week, where we made a card game, which was the best project anyway.
The other things though? I’m not too sure if I put all my heart in them..
Third goal: Be more creative and do more artsy things outside of school: I think I can check that, too. I haven’t done anything too overwhelming but I filled my sketchbooks and practiceD some drawing, so check.
Now, what are my goal for the new semester?
First: survive. I have a job now, so I will have less time and have to manage it better – or get less sleep. I will see which one it will be.
Second: Same as last semester: put more effort into every project.
And third (because I think 3 is a great number): Keep up the artsy stuff.

Sooooo, it’s semester break again and I have officially survived the second semester, which is so strange. I feel like I have just started this, but I will start the third semester in October and it will be officially one year in Berlin for me.
So, what did I take from this semester?
Not nearly as much as from the first semester.
Okay, let’s start with the not so nice things.
The film and postproduction class I had showed me, that while I admire the films and videos from my favorite Youtubers, I do not enjoy making videos myself. It is sooooo much work and needs so much more preparation than I thought. I really underestimated this. But I am glad that I’ve done it at least once, even if the movie didn’t turn out the way I wanted, I will never tell another soul that I ever made it. But it gave me a tiny taste of what video creators are doing all day and showed me that it’s not what I want to do. I think I prefer simple photography.
The second thing I learned was that there are teachers that, I think, sometimes forget to actually teach us. Yes, we are not in high school anymore where everything is laid out for us and just have to learn it, we have to put in effort ourselves but if you want me to develop a key visual, why don’t you start with telling me what that actually is? But I see this as an opportunity to prepare for future exhausting clients who have no clue about what they want. But in all honesty I am hoping for new teachers, because that will provide new input and thoughts and I think our class might need that.
Enough negativity.

I found my love for illustration. We had a project week where we developed a card game for children, which we illustrated. We developed characters, objects etc. and that was something I really enjoyed. I started using my drawing tablet more than I have ever before and got much better in using it. It also got me interested in digital drawing. I have played around in Photoshop but nothing really came out, I’ll just have keep trying.
Actually, the featured picture on this post is something I drew really quickly because I wanted to upload this post, but didn’t want to look for a stock photo or even take a photo myself.
The last thing is, that working for an actual purpose, like a client, is way better than just designing something for myself. It comes with a completely different kind of motivation for the project. And this semester we had 3 projects that were for actual clients, and that kind of made things easier for me.
Also, we finally had a class about typography, which I was awaiting for so long, because it’s such a fundamental topic. And in this same class, we designed a logo. I was really happy with my design, then talked to my teacher about it and he basically crushed it. That was soo frustrating. But we also had to make a poster, so I decided to take a break from the logo and do that, which, to my surprise, he had absolutely nothing to complain about. That gave me some new motivation for the logo and I managed to get him to like it, which is just what I needed.
Even though this semester didn’t feel as positive as the last one, it was not a waste. There will always be good and bad days. And I know that I will probably learn way more from the struggles than from the easy times..

I study Graphic Design, so my job is basically to be creative within a certain context and rules. But because my urge to be creative goes beyond those rules I love everything creative I see, no matter the context or the rules. I am also a very visual person, so if there is something pretty, I will want it, I will click on it, it will get my immediate attention.

I have also felt my creativity disappear over the last years, because I was told and shown that it’s nothing you needed for where I’ve been: school. No one in my family is very interested in art or creativity, so they don’t really understand. I tell my grandparents I make flyers and magazines, because they can’t imagine anything they don’t know. And they have no clue what Graphic Design means. So they couldn’t really see or help me with my disappearing creativity while in school for economics, where no creativity is needed.

Luckily, it’s coming back. I left school, went to Texas, lived with a family that understands creativity and the struggles that come with it and I slowly made my way back to it. Now, in design school, I need to be creative and it’s hard. I hate that I lost the ability to just draw things without thinking about it and I being happy with it. Now, I mostly feel like it’s not enough. And that is why I related so much to the short film I am sharing today. I experienced exactly what the child does and I see how this happens to other children. And I do not agree with that. There need to be so many changes in the school systems and opportunities for the youngest generation, but that would be an hourlong discussion.

So watch the film and make sure to keep you and your loved ones colorful!

You can find more information on the facebook page of the film and here or you can just google it, get creative